A few weeks ago, I started to see people celebrating their twitter anniversaries and I started to look around if I was able to find mine. Today I found it! (Thanks to Gmail!)
I was pretty surprised to find out that today is my twitter anniversary!
I'm pretty happy with Twitter and the way it has changed my life. For some twitter is some kind of a blog, microblog they call it; for others like me Twitter is much more than that. 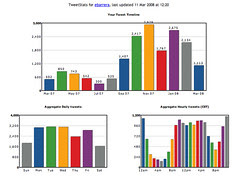 Twitter as a personal journal (Blog).
Twitter is great for cry out loud your rants, your feelings, your emotions... all those thing you can't normally let out everywhere, you can just throw them away via twitter... and maybe even someone hears you!
You can always tell your history, where you are and with who you are. After all, twitter started asking just one simple question:
WHAT ARE YOU DOING?
And the answer to that question is the strength of twitter. I'm also user at pownce and jaiku and some other "twitter-clones" but the popularity of twitter cames froms its simplicity: One Question, One Textbox, One Answer... that's all. You don't have to choose who will get your update, what kind of update you are doing or all that extra stuff that had made Jaiku and Pownce popular between their hardcore users.
Twitter is simplicity, you can update via the web (twitter.com), via IM (Jabber or AIM), via any of the twitter tools available or via SMS (yes, from your cellphone). Now the other part of the twitter.
Twitter as a Communication Tools
As told before, you can update to twitter from virtually any place, that combined with your twitter friends (or followers) can create a great communication tool. It can help you to get news as they happen (Twitter has prove a great way to communicate in case of a fire or a mayor disaster: earthquake, explosion, etc).
But another great use of twitter is its social side. Everybody is talking about Social Networks today, many gurus are making fortunes trying to explain how those networks work and how to take economic advantage of the users: selling stuff, targeting ads, etc. What they don't really understand is that a Social Network has to be easy to use, My Space was pretty simple to use, but when the started to let the users "edit" the pages templates and add widgets it became a mess, we are starting to see the same thing with Facebook, but the advantage the guys at facebook have is the straight simplicity of the pages, a clean template for all the pages... well, almost. When Facebook opened their platform to developers they took a risk. I can guess that anyone with a facebook account hates at least ONE application or one feature of that application. Twitter, on its side, has always kept the simplicity of its template and design.
I guess the main changes we have seen in twitter.com are:
a) lolcatz: they just killed those damn kittens
b) Public Timeline: Well, they moved the time line and made even easier to sing up to twitter
c) New error screens: No more 'lovely' lolcats for us... only dead birds.
All those changes haven't changed a bit twitter, with many of your friends following you on twitter you can make great things! Let's take for example what happens every year at SWSX; interaction with the panels is easier, comments between the public is faster and quiter and the most important part is: PARTIES! At SWSX for the last 2 years people gets to parties thanks to twitter: your friends updates to what party are they going and who is already there. You don't need to call anyone, just pick up a party and go.
On my side of the story, twitter has allowed me to meet great people, make new 'real' friends and get involved in a way or another with a great variety of persons from everywhere in the world. I even started to produce two podcast with people I met on twitter and the most interesting thing: I witnessed people fining jobs thanks to twitter.
This is my recount of my first year using twitter. I'm an IT oriented guy and I follow many of the most popular people on twitter (@loelaporte, @iJustine, etc). But the most wonderful thing that twitter has give me is, finally, the promise of a great way to communicate with people from all over the world in real time. I have been using the internet since 1996 and this is the first time that I can "post" something and get replies almost instantly and I'm not limited to my computer... I can use my phone or my PDA (but those are computers too). Well, after all, we all have computers (even in our pockets) today, don't we?
Follow me on twitter at: twitter.com/ebarrera and be part of the evolution of global communications.
Posted by ebarrera at 12:14

ebarrera
A Mexican web evangelist, early adopter and tech freak. He has lived in FR and MX. He has worked for a Mexican communication agency and now he spends his days and nights as a consultant. He loves coffee, drinks Guinness and is amazingly good at cooking (anything that will take less than 30 minutes to put in the oven).

"Imagination is more important than knowledge..."

What am I doing?